…here are five reasons why making reading
a part of your family road trip is a good idea!

Reason 1.
Because nothing is more hilarious than having Dad act out a girl part. 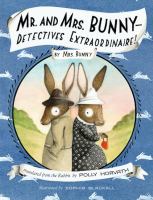 Entertaining the kids with some great read-alouds is a great way to keep them distracted. Try Mr. and Mrs. Bunny, Detectives Extraordinaire, a modern folktale  translated from the original Rabbit by Polly Hovarth. Madeline comes home from school to discover that her parents have been abducted by foxes. She hires Mr. and Mrs. Bunny to help her find them but they haven’t got Detective Licenses. Not to worry, the fedoras will do.

You could also try Ungifted by Gordon Korman: Each chapter can be read by a different member of the family. Roles to read include: Donovan Curtis (I.Q. 112) the natural born troublemaker accidentally sent to the Genius Academy. Dr. Schultz (I.Q. 127) the school division’s Superintendent who will suspend him the minute he finds him. The child geniuses at the Academy: Chloe Garfinkle (I.Q. 159) and Noah Youkilis (I.Q 206) who just might learn something from a “regular” kid.

Reason 2.
Because they are a captive audience!

This Dark Endeavour and Such Wicked Intent are Ken Oppel’s imagined prequels to Frankenstein. Here, Victor is a teenager growing up in the family Chateau with his twin brother Conrad and their cousin Elizabeth. Victor discovers secret rooms and banned books with knowledge so dangerous that they are forbidden to explore it. Of course, they can’t resist. Both books are great to read aloud. But why stress yourself? Pop in a CD and leave it to the professionals. Both are available as audiobooks on CD, read by Luke Daniels.

Reason 3.
Because it’s good to remind them their iPods can be eBook readers too! iPods, iPhones, Android tablets – they can all load library eBooks using the free OverDrive app. Here are some downloadable eBooks perfect for their fast pace and short length:

Prisoner of Snowflake Falls by John Lekich: Henry is being raised by criminals but can’t quite seem to get the “robbing” part of a B&E right. How will he survive the summer when his only guardian, Uncle Andy gets locked up again?

Guilty by Norah McClintock: Finn Newsome and Lila Ouimette are connected by a murder. Lila’s father happens to be Mrs. Newsome’s murderer but the real mystery is the motive. Why would Mr. Ouimette kill Finn’s new step-mother on the very day he was released from jail?

Reason 4.
Because a road trip is the perfect time to have a serious family discussion innocently wrapped up as a fun family book club.

The Reluctant Journal of Henry K. Larsen by Susin Nielsen. Henry has moved from his hometown and changed schools in order to hide his family’s past. Older brother, Jesse has been the victim of bullying and has taken action against his aggressor. Find out what your teens think about bullying and school violence.

My name is Parvana. The latest novel in Deborah Ellis’s Breadwinner series, Parvana is now a young woman, trying to help girls in Afghanistan get an education. She is arrested as a possible terrorist and wonders what will become of her in jail. Discover what your teens think about life and war in the Middle East.

Reason 5.
Because all of these titles are on the MYRCA list this year. If they read at least 5 of them, your kids can vote for their favorite. Visit www.myrca.ca for more information.

This entry was posted in Miscellaneous and tagged books for kids, children, guest post, MYRCA. Bookmark the permalink.